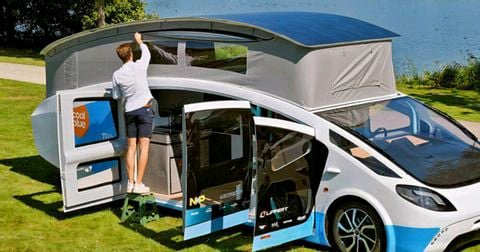 Via: Flickr
The automobile industry continues to warm up to the electric and solar-powered car segments. Until a few decades ago, this is something we probably never thought would make it into the real world. From 1955, solar-powered cars had made a huge mark in the industry, and bythe late 20th century, they were set to become the next big thing.

Companies such as Atlis Motor Vehicles and Aptera Motors, among other well-established brands, are making battery-powered vehicles integrated with sophisticated solar panels but with the capabilities of an ordinary gas-powered car, if not more. As far as we know, solar-powered cars have a lot of potential, and may soon dominate the industry with their use of renewable and inexpensive energy.

Students from the Eindhoven University of Technology in the Netherlands have designed and built a solar-powered camper van. This 22-student invention has the interior of a motorhome and a driving range of more than 430 miles. The Stella Vita – as the students call it – has already earned itself the insignia as the world’s first solar-powered camper van. The model gets its energy from large solar panels, which have been integrated into the lifting roof. The inside looks like a pimped-up version of a full-size RV, with enough room to sleep, cook, and work.

On September 19, the camper van was driven on a 1,242-mile trip from Eindhoven University to the southern tip of Spain at a town called Tarifa. The Stella Vita camper van completed the journey without stopping to charge.

The Stella Vita Camper Van has a 450+ mile driving range and comes with 57.4 square meters of solar panels. Here’s all you should know about the world’s first solar-powered camper van.

The Stella Vita Has An Eye-Catching Appearance
Via: Solar Team Eindhoven
The Camper Van is all kinds of beautiful. Its front features a wide windshield that extends to become part of the roof. Its futuristic headlights also move to its sides. The van hangs low and has large wheels. The rear of the camper van has passenger-side suicide doors that can open to about 90 degrees for maximum access.